Remembering Harvey Pekar: the cranky comic book author who survived cancer and then wrote about him

The fight against cancer is not for the faint of heart, even when the result is healing, and for many, a long and prolonged life.

For someone like the cantankerous comic book writer Harvey pekar, who debated David Letterman on television and saw his life portrayed by Paul Giamatti in the cult film American splendor, the prospect of moving to a new home was terrifying enough, not to mention the radiation treatments.

“I’m catastrophic about everything,” Pekar told me in an interview in 2005, 15 years after he was first diagnosed with non-Hodgkin lymphoma, cancer of the immune system.

Catastrophic? â€œThe other day I lost my keys in my car,â€ Pekar explained. “I think people will see the keys hanging off the ignition, throw a stone out the window and chase it away.” Everyone has certain fears about certain things, but I seem to be afraid of almost everything. ”

He’s surely not an ideal candidate for months of chemotherapy, conflicting medical advice, and a constant fear of what might follow.

But with the help of loving wife, writer and social activist Joyce Brabner, the fearful Pekar survived months of worry, anger, and painful cancer treatment in 1990 and 1991. He died 20 years later, in July 2010, not from cancer, but what an Ohio coroner ruled was an accidental overdose of pain relievers. He was 70 years old.

The Pekar comics weren’t about superheroes; they were about the ordinary experiences of ordinary people. He held a monotonous public service job in Cleveland, writing about the day-to-day experiences of his colleagues, which he called “the stuff of life – arguing with supervisors, things like that.” Working with various artists, including legendary underground cartoonist R. Crumb, Pekar says he was able to “live a two-tier life, supporting my artistic side with public service work.”

No subject was off limits for his comics, including his battle with cancer, chronicled in an award-winning graphic novel, Our year against cancer, written by Pekar and Brabner and illustrated by Frank Stack in 1994. The 252-page novel is flawless, from the heartbreaking effects of chemotherapy to the psychological impact on patients and families, and the importance of finding the right doctors and treatments.

As the Gulf War approached in 1990, Pekar ignored a small lump in his groin for months. “When are you going to do something, Harvey?” The Brabner woman asks in a comic book panel. â€œIt could be something serious. You are not fair to yourself or me. 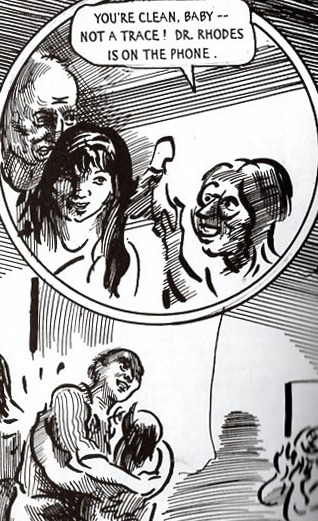 In a thought bubble, Pekar reveals, “Yes, and if only she knew, it gets bigger.” Later he said, “I just don’t want to deal with it now.” But Brabner insists.

“Harvey thought he was indestructible,” Brabner, 69, recalled in a recent interview. â€œHarvey might not have known, but I did. Only one of us was realistic. Do you find a bump? Do something about it! I took him to the doctor the minute I found out.

Indeed, a doctor at work tells Pekar that he should have the lump checked. â€œIt’s big now and you say it’s growing. It could be lymphoma.

Take a closer look at lymphoma

In Pekar’s case, it was stage 1 non-Hodgkin lymphoma, a cancer that attacks lymphocytes – a type of white blood cell that is part of the body’s natural immune system. Cancerous lymph nodes can appear throughout the body – in the throat, digestive tract, bone marrow, or, in Pekar’s case, near his pelvis.

The The American Cancer Society reports that non-Hodgkin lymphoma is one of the most common types of cancer, accounting for 4% of all cancers this year, with a five-year survival rate for those diagnosed at 72%. (Pekar lived another 20 years.)

There is no recommended screening test for non-Hodgkin lymphoma, but signs can appear early, such as enlarged lymph nodes in the form of lumps along the neck, armpits, or groin. Symptoms may include a prolonged fever, chills, profuse sweating at night, weight loss, fatigue, and swelling of the abdomen.

One problem with early detection is that these types of symptoms, even lumps, can be caused by many things, including infections. But in any case, these signs should be checked by a doctor.

A cure worse than the cure?

Pekar’s large cancerous growth was removed by surgery and he began chemotherapy. Chemo is different for all patients, some fight it while others have severe reactions, either physically or emotionally.

The sense of dread inherent in Pekar – the so-called â€œcatastrophizerâ€ – seemed to amplify these unwanted reactions. “Why is the glass always ‘half empty’ for me? He thinks, expecting the worst every step of the way.

His hair was falling out all over (which is not uncommon), his body ached, he could not sleep, nor climb the stairs. Panel after panel shows him in a state of panic and unhappiness. He tries to return to work, ends up being sent home. “I’m going to lie on the bathroom floor and die,” Pekar writes at the start of a chapter in the book.

Treatment for non-Hodgkin lymphoma: finding the right one for you

In a surprising encounter, Pekar’s first doctor admits, â€œChemotherapy can be a 50/50 proposition at best. Who knows? Some of the drugs I administered may have killed as many patients as I cured.

With a new, more empathetic oncologist, however, and his wife’s hard love, Pekar went through chemo, then one final round of radiation. The cancer is declared gone. â€œYou’re clean, baby. Not a trace, ” Brabner said triumphantly to her husband after the doctor’s call.

Her hair is growing back. His life resumes. The couple even become adoptive parents of a 9-year-old girl.

Pekar had another bout with cancer after that, but recovered again and remained an active writer. Brabner says a lesson she learned from all of this was not to take care of caregiving alone: â€‹â€‹â€œOne thing I would have done differently, I would have been open to more help. “

Brabner, who works with refugees and dissidents from war-torn countries, summed up his experience: â€œCancer is so common. It’s part of our world. Catch it early, have no fear, get help. Talk to the experts and always ask for a second opinion.

If a book isn’t in the school library, ‘it might as well not exist’

Catherine Gorski O’Connor, author and illustrator of children’s books, will discuss the creative and practical process

Say ‘Shit!’ For the perfect shots: Why the Pennsylvania children’s book author is going viral

Ignite the Fire Within author Nancy Meek launches The Women 360